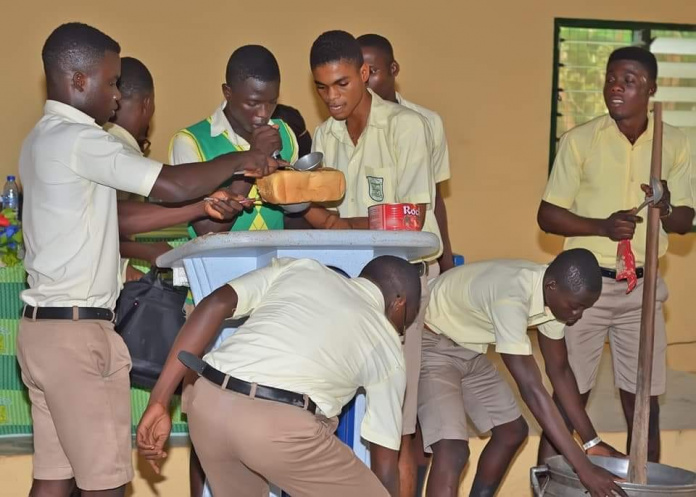 Whether it is Achimota School or Bolga Girls’ High that you went to, chances are we all ate the same foods in high school.

As a boarder, before you say your final goodbye to SHS, you’re likely to have received a single ladle of rice, fought over the head of table position, smuggled food out of the dining hall, not gotten food or received lashes for not going to the dining hall.

READ MORE: 4 Important things to note if you are attending Senior High School for the first time

The dining hall is also one of the most memorable places because it boasts of some of the most legendary meals ever.

All across the nation, there are 5 meals that are common to every SHS dining hall.

The Famous Gob3 aka Red Red

The gentlemen’s favourite, the broke student’s saviour. Whether boiled too soft or too hard, there’s nothing a sprinkle of gari can’t put right. And after a meal of gobe, be sure to catch the queue at the loo.

Following closely on Gobe’s heels is Kenkey. Be it Fante Kenkey or Ga Kenkey, Kenkey is Kenkey. Served with blended pepper and fried fish, kenkey is the next favourite of students.

Though most students will choose Ga Kenkey over Fante Kenkey with the argument that, the only thing Fante kenkey is good for is mashkey, you’ll still find them scrambling over it and smuggling them into their hostels.

Taking the third spot on our list is the ‘controversial’ rice and gas. We all know what boiled rice is. But do we know what gas is? Is it a stew? Is it a soup? Whatever it is, we know it goes down well with our rice.

And oh, the rumours that gas is prepared with flour may or may not be facts, we cannot confirm or deny anything so don’t ask us anything, especially whether it’s cooked with oil or not. The school kitchen is open to all and sundry. Go do your research. Porridge and Boflot.

The dining hall is likely to be crowded during breakfast when it’s Koko and Burf.

The cornmeal porridge is served with it’s ally boflot, sweetened flour deep fried in oil. Debatably students’ favourite breakfast meal, be sure to open up your burf to avoid chewing weevils and flour worms.

Just kidding (actually we’re not). And if you’re a sweet tooth, you might need to send extra sugar to the dining hall. The meals are prepared with diabetes patients in mind.

Our final common nationwide dining hall meal is the English breakfast, tea. Except the dining hall version consists of two teabags soaked in 4 liters of hot water with some sugar and milk to taste. Or 5 tablespoons of cocoa powder diluted with the same amount of water, with the same accompaniment.

And not forgetting the bread. Not butter bread, not sugar bread, not even tea bread. But bread because that’s what we call baked flour mixed with baking soda and salt.

Meet Paul Mensah: The Ghanaian Chemical Engineer who led the team that developed the...

Egypt: Exploring the Reefs of the Red Sea

December in Ghana: Here are the best places to have fun on Christmas