5 break-up lines to lessen a heartbreak 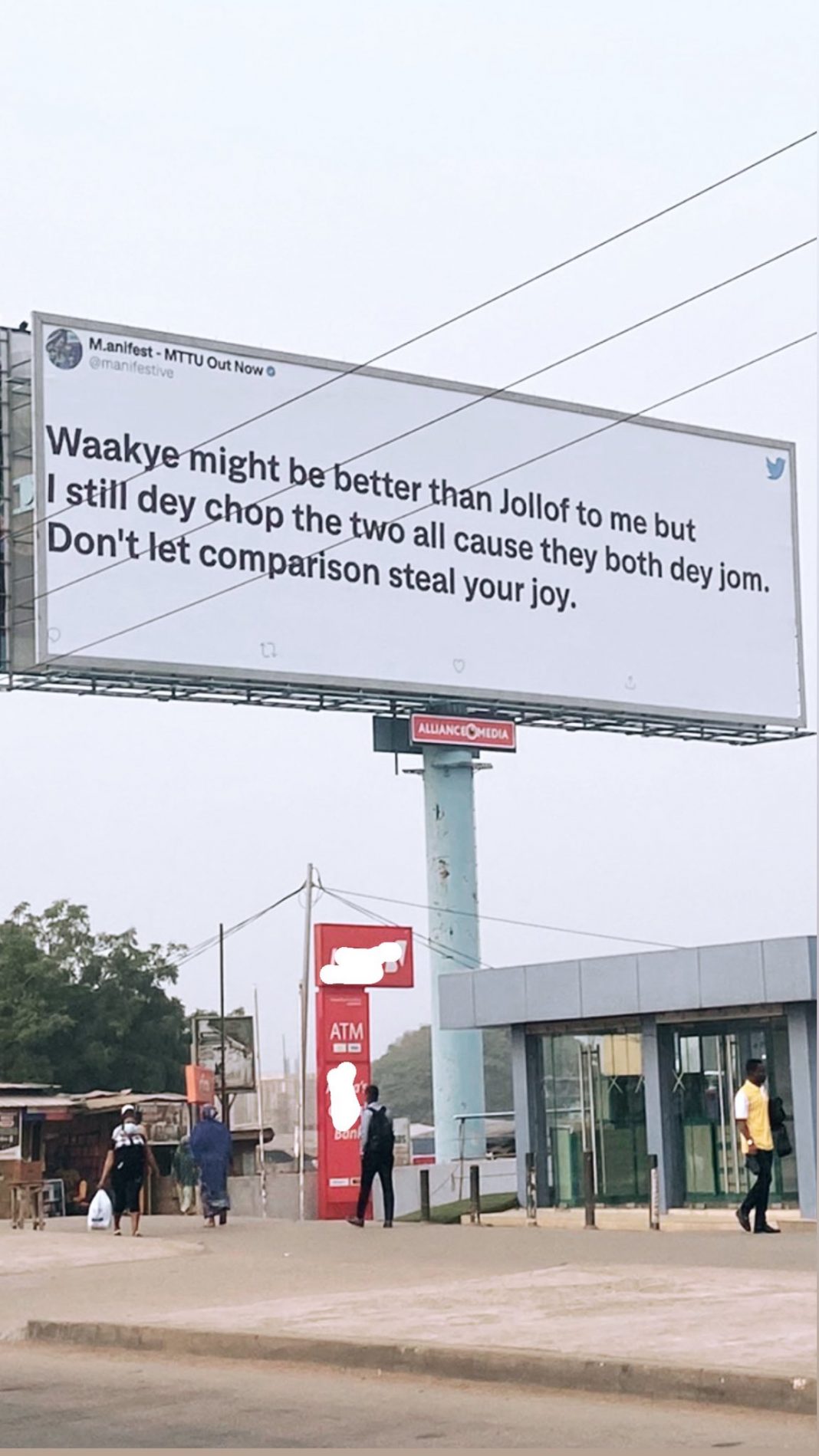 We are probably leaning more towards waakye but Manifest’s message isn’t lost on us. Variety is the spice of life and variety in ample portion is what Twitter Ghana is litling across the continent.

People across Accra could not believe their eyes as the funniest, most relatable Tweets from Twitter Ghana popped up all over the capital. Many have shared images of the giant billboards, which immortalise moments, realisations and hilarious observations about the realities of everyday life in Ghana. This forms parts of Twitter’s first major in-country campaign, which includes the launch of Twitter’s first handle in sub-saharan Africa; @TwitterGhana.

By tapping into the vibe of daily conversation on platform, the new dedicated handle for Ghana is set to amplify and elevate the best of Ghanaian conversations on Twitter. @TwitterGhana will also start, curate and hold conversations, while reacting to trends and queries, with good-natured humour and in language that’s unique to Ghana’s vibrant Twitter community.

The activation of the new handle and the unveiling of the billboards across Accra and Tema – showcasing the best Tweets and voices of Twitter Ghana – represent a ramping up of Twitter’s presence on the continent, following its market-entry announcement earlier in the year.

The billboards, seen in this Thread, cover topics and hilarious moments that are uniquely Ghanaian; with a love for food heavily featured:

They also showcase the Ghanaian spirit of “enjoyment”, which is always well represented on Twitter:

And the hilarity that is typical of and relatable to all Ghanaians also take centre stage:

Helen Appiah-Ampofo (@FlavaFlavswife), a Radio & TV Personality and one of the Tweeters featured on the billboards, expressed excitement at being included in the campaign. She said, “It’s super exciting to be featured in this campaign. Twitter has and continues to be the portal to such an exciting world. Making people happy by Tweeting is my superpower and long may it continue!” Other featured Tweeters shared their excitement at spotting their billboards as well; @TAFELMUKOVIC said, “Go tell ma mama I made it on the twitter billboard 🤝”, and @JoewackleGh Tweeted, “look at a billboard my tweet as an entire sermon”.

The unveiling of the billboards were met with an overwhelmingly positive response on the Timeline, with #TwitterGhana trending on Monday and a lot of reactions from people on Twitter. @itz_jux_oj asked, “Aaah, who is putting hilarious Ghanaian tweets on huge billboards all around in Accra?”, @ama_dokyi shared her excitement about spotting a billboard, “Found one of those billboards with tweets! @TAFELMUKOVIC”, and @DarkManKpakpo Tweeted a simple “I agree” in response to a billboard he spotted.

A Twitter spokesperson said: “December in Accra has become iconic for bringing Ghana’s vibrant communities and the Diaspora together in a spirit of celebration, enjoyment, and gratitude. It’s the perfect time for us to showcase the unique expressions of the Ghanaian experience which you can only find on Twitter, particularly during the holiday season. We are proud to provide an outlet for people to share moments in life and culture that are unmistakably Ghanaian, and this campaign is a celebration of the joys and moments that define that shared identity.”

As part of the ongoing campaign, and in celebration of the newly launched official handle, @TwitterGhana and @TwitterMusic also hosted an exclusive and intimate #TapInWith conversation with international Superstar Stonebwoy on Twitter Spaces.  Ahead of the event, fans and media submitted questions for Stonebwoy using the #TapInWith hashtag.