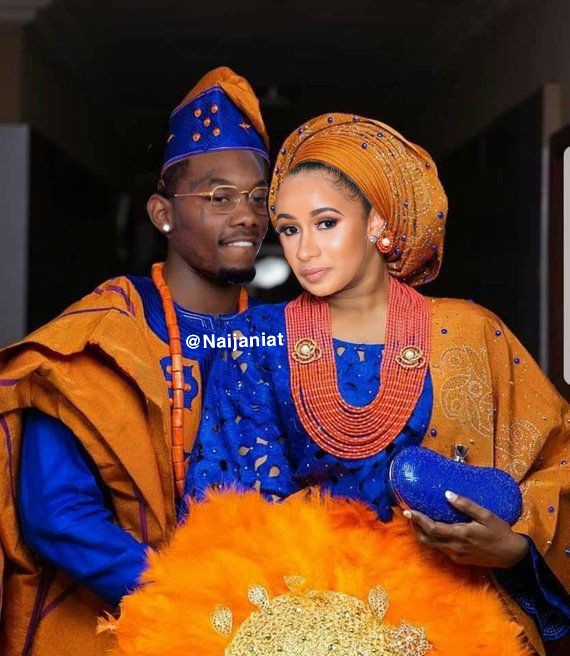 American rapper, Cardi B plans to leave the United States of America for the West African country of Nigeria in case the country is attacked by Iran.

As tensions flare between the U.S and Iran after the latter bombed and killed an Iranian military and leader of the Iranian Quds Force, Qassem Soleimani, people on social media put their own funny twist to the serious issue which caught the attention of the ‘Bodak Yellow’ singer’.

“Naaaaa these memes are fuckin but shit ain’t no joke! Specially being from New York. Its sad this man is putting Americans live in danger. Dumbest move Trump did till date …I’m filing for my Nigerian citizenship.” the rapper wrote on Twitter

Now the rapper wants to flee with her husband and member of Migos, Offset.

In another post on Monday, January 6, 2020, Cardi B who was given the ethnic name Chioma B during her recent tour of Ghana and Nigeria shared a photo of Offset in a photoshopped Agbada made by her fans in the country.

She wrote alongside the photo asking her fans to help her convince Offset to join her on the trip.

“Convince him to move with me,” she wrote.

And her Nigerian fans have lived up to the bill with comments and tweets about her request. Whiles some have created more hilarious photos of the couple, others have tweeted asking him to join the trip.

It is unclear if Cardi B, who was born in Manhattan and raised in The Bronx, is serious about moving to Nigeria, a country she speaks highly off and has constantly said was a wonderful destination or just having fun. But the people of Nigeria are excited and ready to host her if she makes the move.

After he got stuck in Ghana during the lockdown, this UK resident set up...

Ghana and the Ivory Coast have made history with a $2,600 price for cocoa

Who Rocked it Better: Funke Akindele and Omoyeni were both spotted in the same...