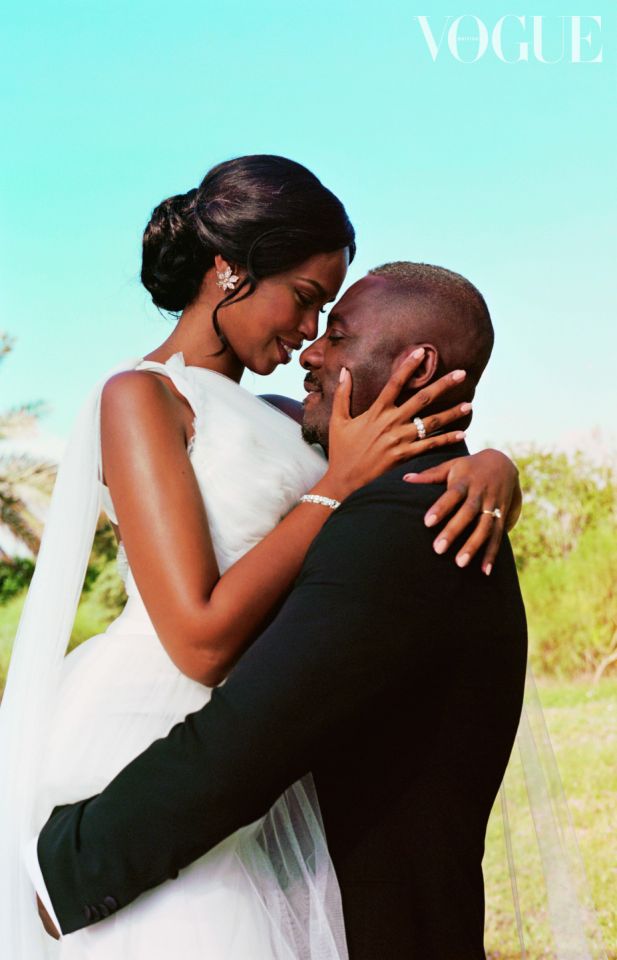 In April this year, the “Beast of No Nation” actor married Somalian model and former beauty queen, 31-year-old Sabrina at a resort in Morocco. British Vogue was in charge of publicity for that event which saw a bevy of A-list guest attend including British Vogue Editor, Edward Enninful, Naomi Campbell and a surprise performance from Nigerian Davido.

The couple appeared on the publication’s special July bridal edition which was released online on Tuesday and was photographed by Sean Thomas. For the historic cover, the lovebirds are up in arms whiles wearing their wedding clothes a day before their nuptials.

“@IdrisElba and I were styled by @Edward_Enninful the day before our wedding for the special July issue bridal cover for @BritishVogue. See more from our special day in the new issue – on sale this Friday.” Sabrina wrote on her Instagram

Sabrina’s Vera Wang gown was styled differently for the cover matching her outfit with David Morris Jewelry whiles Idris donned a tuxedo suit from Armani, an Alexander McQueen bowtie and a shirt by Brioni.

Idris who has been in two previous marriages before his present one revealed that he wasn’t sure he would be finding love again in his interview. Speaking to British Vogue he revealed that he never thought he could get married again.

“You know, I’m 47 this year, been married and lived a full life before I even met Sabrina,” the Disc Jockey explained “It wasn’t something that I wanted to do, get married again. But Sabrina has deepened friendships with people I’ve known longer than [her], nurturing the best side of me to make me connect to my friends more,”

Elba has a daughter, Isan, with his first wife, make-up artist, Hanne Nørgaard, who he married in 1999 and a son named Winston with his ex-girlfriend Naiyana Garth. The actor was also married to real-estate lawyer Sonya Nicole Hamlin, in 2006 but the marriage collapsed 4 months after.

Style critics are calling Nana Akua Addo the best-dressed celebrity at the #AMVCA7 and...