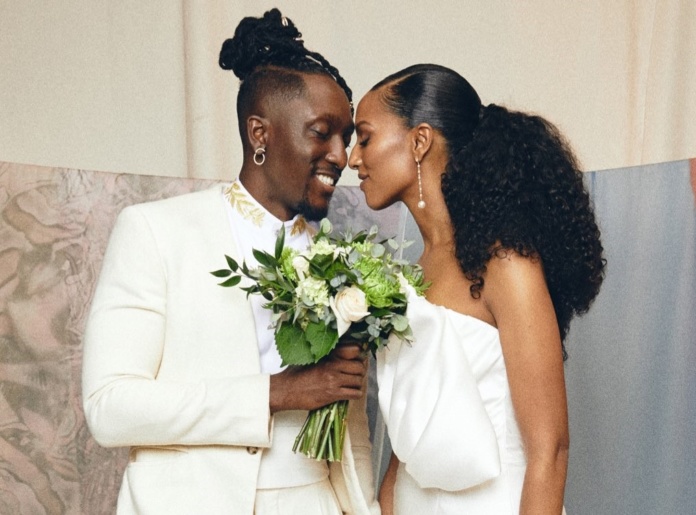 “I have too much to be thankful for one spending the rest of my life with this beautiful soul and partner Mekdes — we met via Instagram in 2014 and now we’re starting the journey of life together. Thank you to anyone who poured into us.” Ghanaian-American Photographer, Joshua Kissi wrote on his twitter a day after marrying the love of his life, Ethiopian-American model/researcher, Mekdes Mersha in a beautiful ceremony that inculcated both African and American themes.

If Marvel’s Wakanda ever-existed Mr and Mrs Kissi’s wedding will be the textbook definition of how weddings are done in the African country.

The Ghanaian creative who is domiciled in Brooklyn, New York, first met his wife on social media in what he describes as love at first like after he slided into the DM (direct message) of Mekdes in 2014. The friendship which will later blossom into a relationship and marriage begun from the photo-sharing app where both of them have garnered a huge number of following for their creativity.

Kissi is widely known for his work as fashion and style blogger for Street Etiquette which has become significant in black web culture and recently co-started, photo stock company, TONL , whose aim is to change the narrative and current aesthetics of stock photography through cultural diversity and representation.

The Kissi’s had their white wedding at Art Factory Studio in Paterson, NJ on March 25th, 2019 a testament to their affinity for arts and creativity. The cultural and styled-themed event which has been described as a “Diasporic Wonderland” was attended by friends, relatives and associates of the couple who are mostly from different parts of Africa.

For their white wedding, Mrs Mersha Kiss who made a pretty stunning Ethiopian bride dazzled in an ivory white strapless sheath gown and a larger-than-life floral headpiece as Joshua complimented her style with a custom suit by Ikiré Jones.

Their wedding reception which was shared online by a number of their friends saw they couple celebrate their African roots as the couple infused traditions from both their cultures in a symbiotic manner.

As a Ghanaian and the original home of Kente, Joshua and his wife styled their outfits with the regal fabric with the groom and bride draped in the cloth and accessorized with beads.

For the Ethiopian outfits, they also infused Ghanaian Kente in the tunic he wore and the Rachel Addison gown worn by Mersha. An excited Mrs Kissi shared her wedding look with the accompanying caption after they had gone viral

“The Kissi’s— Thank you Jesus for bringing this man into my life. Still can’t stop crying tears of joy 😭
Photo by the legendary @micaiahcarter Floral piece inspired by the legendary @joshuawerber#loveatfirstlike” She wrote

The couple are currently in Jamaica enjoying a blissful honeymoon and we can say is congratulations Guys. Your love is beautiful

This has to be the cutest father and daughter moment we've seen yet!! Samuel...

Consider these reasons before postponing or cancelling your 2020 Wedding

7 important facts to know about the Kente fabric

Fela Makafui is redefining what it means to be called a boss chick in...

These photos of Joe Mettle, Wiyala and Adjetey Anang walking on the runway has...