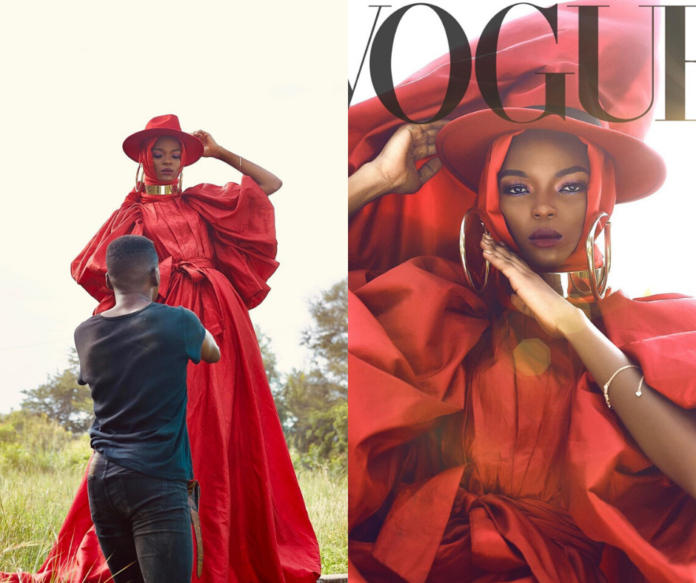 Stylist to the stars and Ghanaian creative, Kelvin Vincent was one of the lucky readers selected by British Vogue Editor, Edward Enninful as part of his Top 10 #VogueChallenge Covers.

Vincent joined the viral global cover challenge for the Fashion’s Bible last week and caught the eye of its editor with “THE FEARLESS MUSLIM” cover out of over Fifty-One Thousand entries.

The cover which features a model wearing a red hijab, hat and a matching elaborate dress according to the award-winning stylist was inspired by Muslim women.

“I want Muslim women especially to stand firm on what they want despite the misleading pictures of Arab women, extremism, Islamophobia and the popular stereotyping of women as weak and voiceless,” he wrote on Instagram, a platform where he has grown a massive following for his one-of-a-kind creations.

Kelvincent who works with the likes of Becca, Joselyn Dumas, Victoria Micheals and many other A-listers in Ghana’s entertainment and culture industry said his body of work was mostly inspired by women and their causes.

“99.9% of the time I’m inspired by women. I’m thrilled by the way they move. Their femininity and the way they embrace power.
I love to make women feel confident and unstoppable and it’s seen in my editorials and in all my clients,” he adds.

The July 2020 issue of British Vogue which sparked the #VogueChallenge is an unprecedented one featuring the likes of Narguis Horsford, a train driver on the London Overground, Rachel Millar, 24, a community midwife in east London, and Anisa Omar, a 21-year-old supermarket worker in King’s Cross.

In the word’s of Edward Enninful, Vogue’s British Ghanaian editor, “I was convinced we needed to include a portfolio of the essential workers who have kept this country on its feet over the last few difficult months in the current issue.”

Enninful’s cover selection which he announced on Instagram and later published on British Vogue’s website feature entries from Dosha Deng, Valerian Ahyr, Andres Eningles and 7 others.

“I’ve been so thrilled to watch the #VogueChallenge take off all over the world,” announced Enninful. “Scrolling through all the entries, I’ve been struck by the beauty in all shapes and sizes, represented in all colours and creeds. It has shown me that there is so much talent and creativity in the world if you are willing to look for it.

“As for the #VogueChallenge, there is so much food for thought, so much to inspire. I am happy to report that I’ll be scrolling through entries for many more days to come!”

Responding to his surprise selection, the trailblazing styler wrote:  “I’m actually at a loss of words and y’all know me, I talk a lot.
Thank you to the awesome team who stood by me to create this. We shot this editorial 4 times in 4 different days. So many complications. The team could’ve given up on me but they stood by me through it all.”

Below is a list of other covers in his Fearless Muslim challenge that could have made the list easily.

#FineLove: From meeting at a friend’s birthday party to tying the knot, here’s...

We need to talk about how overwhelmingly glamorous Nana Akua Addo first outfit for...

From Spelling Bee champion To Dr: Darren Sackey’s story is fit for a series...