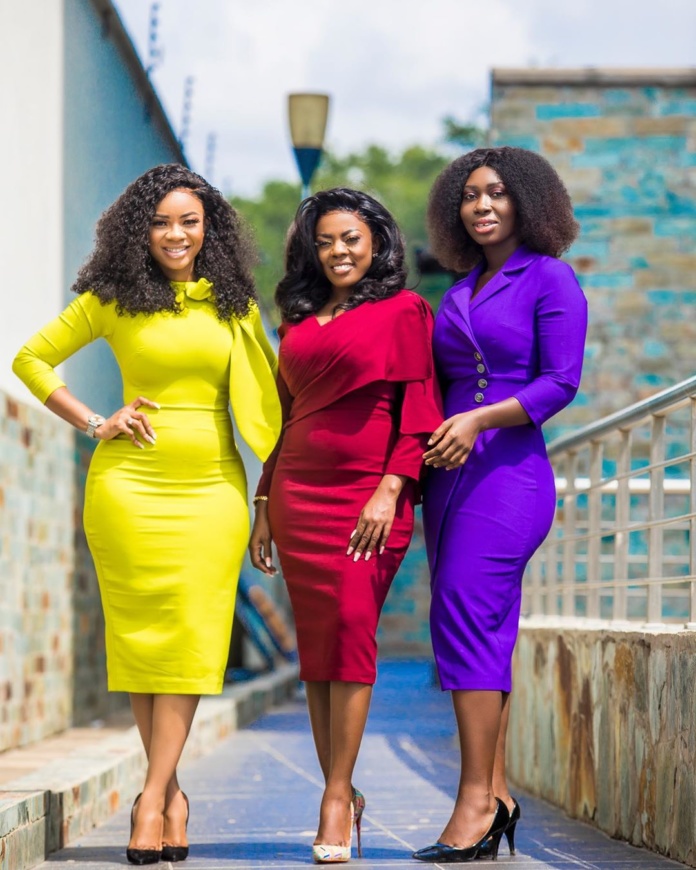 Nana Aba Anamoah and her media daughters, Serwaa Amihere as well as Adwoa Loud have taken over the internet as they celebrated what they termed as ‘World Nana Aba Day’

World Nana Aba day was simply her birthday which fell on Wednesday, June 19th and was meet with circumstance and pageantry on social media. The award-winning TV host and journalist organized a giveaway among other things to celebrate her new age.

But one of the things that stood out was the birthday photos that were released on the internet.

In the images, Nana Aba is resplendent in a burgundy dress with a cape from Ghanaian designer, Yartel. By her left side was Serwaa Amihere who wore a neon yellow dress and Adwoa Loud in a purple buttoned up wrap dress.

Commenters on social media have had mixed reviews of the looks with some likening the shots to popular kids TV show, Teletubbies due to the similarity in the colors they wore.

Nana Aba Anamoah is a celebrated journalist with an expansive career in the Ghanaian media, having worked with TV3 and later GHOne where she is the head of the news room and production.

Travel Tuesday: 5 Ghanaian foods you can travel with on your trip abroad

It’s been 3 years since #KandK16 happened. See what Kobby and Kukua have been...

The definitive guide to achieving that dream life and body

I was ridiculed for wearing African print on TV-Gifty Anti