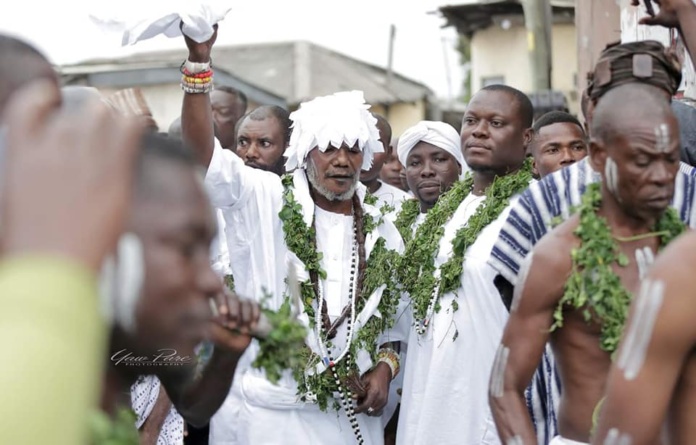 There are over 70 festivals celebrated in Ghana annually for so many reasons ranging from culture, agriculture, religion etc.

As a matter of fact, you can attend at least a festival each week to last a whole year and boost Ghana’s domestic tourism.

This is due to the diverse history and rich culture present in the country making each set of people unique in their beliefs and traditions.

From Bolga to Tarkwa and Accra to Keta, there are Ghanaian festivals that represent the heart and soul of the nation and fit your budget.

Deciding which ones to attend can also get overwhelming, but don’t worry, we have it all covered with this list.

Here are the best 10 Ghanaian festivals you should attend in your lifetime.

The Bugum Chugu festival is celebrated by the tribes and clans of Northern Ghana.

It is celebrated in remembrance of the evil tree set ablaze by warriors because it kidnapped the son of ancient chief.

It is celebrated on the ninth day of the first month of the Dagomba lunar year, the Bugum Goli, or the month of fire. The date on the Gregorian calendar keeps changing, so you’ll have to keep an eye out.

Celebrated by the Ahanta/Nzema people of the Western Region, it is to remember the hunter Akpoley who learnt and taught his people the dance of dwarfs to ward of evil spirits and usher in a bountiful harvest. The ripening of the palm fruit marks the beginning of the festivities, usually around September.

The Ohum festival is celebrated by the Akyem people of the Eastern Region to thank Odomankoma and the ancestors for the new yam harvest and to seek their protection and favour for the new incoming year. It is usually on a Tuesday or Wednesday in September or October, depending on the month Ohumkan festival was celebrated.

The Hogbetsotso festival is celebrated by the Anlo people of the Volta Region to commemorate their escape from Notsie, their ancient city in present-day Togo and the tyranny of King Agorkoli between the fourteenth and the fifteenth centuries.

During the festival, many cultural and traditional art forms are given centre stage, making it a must-see for art lovers.

Aboakyer translates literally to “game hunting” and is celebrated by the Efutu people of Winneba in the Central Region.

Two hunting parties are dispatched on a race to see who returns first with a deer to be sacrificed to the god Penkye Otu.

There is a rich display of culture and a treasure trove of oral history attached to the festival.

It is usually celebrated in the first or second week of May each year.

The Homowo festival is celebrated by the Ga-Adangbe people of the Greater-Accra Region to hoot at hunger and to commemorate the abundance that followed a period of severe famine in their history.

Traditionally, it begins in the month of May with the planting of maize and yam before the rainy season starts. Homowo is celebrated by several towns and Neighbourhoods in Accra namely: La, Teshie, Teshie Nungua, Osu, Ga-Mashie, Tema, Prampram, and Ningo.

Typical of Ghanaian festivals, it is a very colourful event, with beautiful displays of culture and traditional mysticism.

A key highlight of the weekly Homowo festival is the Akweley Suma; a celebration of twins and traditional ceremony for the cleansing of all evil spirits.

Kpoikpoi is also sprinkled and a libation poured to the gods for a bumper harvest.

The Bakatue festival of the Edina people of Elmina in the Central Region is one festival to not miss.

It is to mark the beginning of the fishing season and to celebrate the purging of the baka, the lagoon, on the first Tuesday of July every year. There are many activities that lead up to the climax, including a boat race among the fisherfolk.

Celebrated by the chiefs and people of Cape Coast, the Fetu Afahye is marked annually specifically on the first Saturday in September.

According to oral history,  in the past, there was an outbreak of disease among the Oguaa people that killed many of the indigenes. They prayed to the gods to help them to get rid of the disease.

It is a communal festival celebrated to keep the town clean and to prevent another epidemic from befalling the people.

The Damba festival is celebrated by several tribes that reside in the Northern, Savanna, North East and Upper West Regions of Ghana.

The festival has several variations including ‘Damba’ in Dagbani, Damma in Mampruli and Jingbenti in Waali.

Damba is celebrated in the Dagomba lunar month of Damba, which corresponds to the third month of the Islamic calendar, Rabia al-Awwal. It is both a religious and cultural festival.

It is to mark the birth and naming of the Holy Prophet, Muhammad, however, the actual activities of the celebration is a glorification of the chieftaincy, rather than specific Islamic motifs. The festival is categorized into three sessions; the Somo Damba, the Naa Damba and the Belkulsi.

Once every six weeks, the Ashanti people celebrate the Akwasidae both at home and abroad. It is celebrated 9 times in the year.

The festival is to honour the ancestors and the gods of the Ashanti people. Eto and boiled eggs are used as offerings to the gods during the festival.

The golden stool which is believed to hold the soul of Asanteman is displayed at the palace grounds in the presence of the king, and people visit in large numbers, singing and dancing.

What other Ghanaian festivals do you know??

Adekunle Gold & Simi have announced the birth of their first baby with an...

Forbes refutes claims that Kanye West is the richest black man in America.