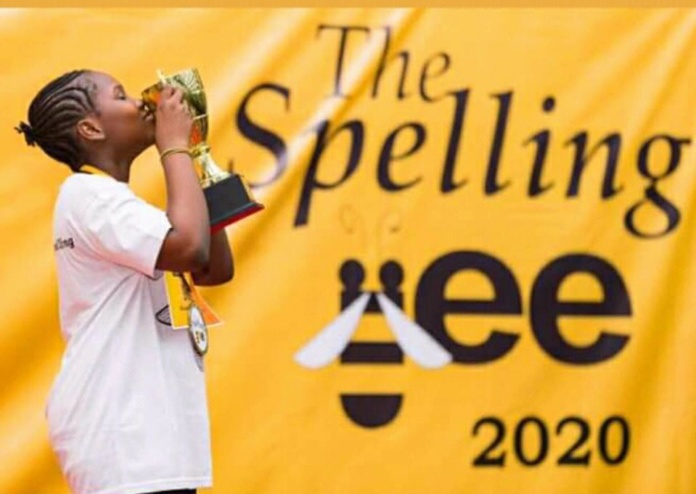 It was all joy and euphoria when first-time contestant, Nadia Chelpang from Tamale was announced as the winner of the 12th edition of Spelling Bee competition.

Nadia who is a pupil of the Alhassan Gbanza memorial school in Tamale, Northern Region beat stiff competition from over 150 kids drawn out of Ghana for the finals which took place at the Great hall of the Kwame Nkrumah University of Science and Technology.

Following Ms Chelpang in the second position was Aku-Mishee of the University of Ghana Basic School and Joel of Victoria Grammar School who came in third.

Nadia’s win has guaranteed her a spot as Ghana’s representative in the International version of the 93rd Scripps Spelling Bee slated for later this year in Washington DC, USA.

She also walked away with a GHS 4000 prize money, an engraved golden trophy, a DSTV decoder plus one year’s subscription, and GHS 1,000 gift voucher for books and a certificate of recognition.

Aku-Mishee also received a return ticket to Kenya, a cash prize of GHS 2,000, GHS 800 worth of gift voucher for books, a silver medal, a DSTV decoder plus 6 months subscription and a certificate of recognition.

Whiles 2nd runner up, Joel, took home a cash prize of GHS 1,500, a DSTV decoder, GHS 500 worth of gift voucher for books, a bronze medal and a certificate of recognition.

This year’s edition was full of historic firsts; for the first time, deaf students were included in the spelling competition and was the first time to be hosted in Kumasi.

The Scripps National Spelling Bee is organized by the Young Educators Foundation.

We Bet You Had At Least One Of These Ghanaian Dishes On Christmas Day!

Take a look at all the glamour from Ghanaian goalkeeper, Fatau Dauda and his...