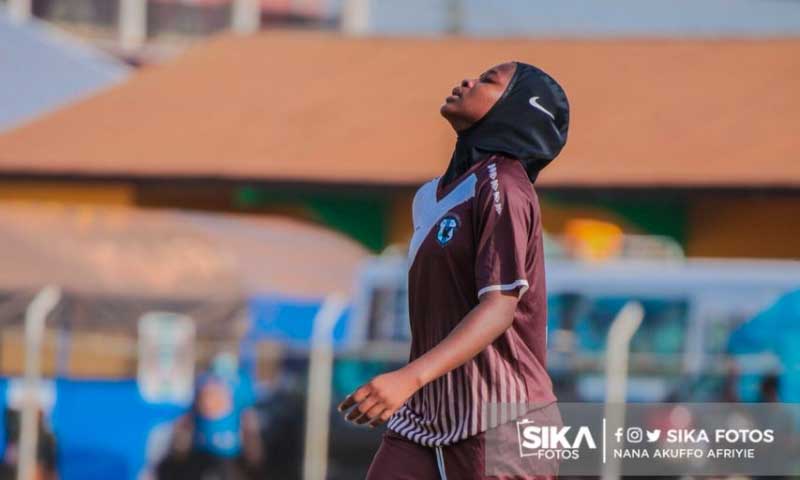 In a world where faith and sports rarely mix, Anatu Sadat has braved the odds to find the perfect spot where these two meet and blossomed.

Anatu Sadat of Northern Ladies Football Club made history in Ghana women’s football a few weeks ago when she became the first player in the league to wear a hijab.

For her first game of the season, she mentioned that her sports Hijab wasn’t available at that point in time so she had to play the game without one. A situation that went against her faith and her beliefs.

Talking to TV3 News, Sadat said ” In the beginning of the season, I didn’t wear my hijab because it wasn’t available back then… A lot of people were commenting and talking about how beautiful I am, forgetting to mention how I performed in the game. I was happy but in a way, I wasn’t that happy.”

A few weeks later, in a league game against Ampem Darkoa Ladies, Anatu Sadat broke the internet again. She has now become the first woman to ever wear a Hijab during a professional football game.

Even though it scared her, it was something that she had always wanted to do owing to the fact that Hijabs weren’t accepted in female sports until 2014 that FIFA allowed it. She wasn’t sure if that decision carried weight here in Ghana. In spite all odds, she took the chance and now many other Muslim girls who have the passion for sports can follow in her steps.

Her bold move has caused the Ghana Football Association to release a statement allowing females to wear hijabs during their games.

Her coach, Sumani Basuru-Deen, spoke on how her achievement had made him happy. He said that it would pave way for many Muslim girls whose parents are pessimistic about letting their children follow their athletic dreams.

Anatu Sadat’s story just begun and it is definitely a story to follow.

Previous articleGhanaians descend on Samuel Attah-Mensah after a photo of him and his adopted daughter surfaced on Twitter.
Next article8 African Hijabi Bloggers you need to follow