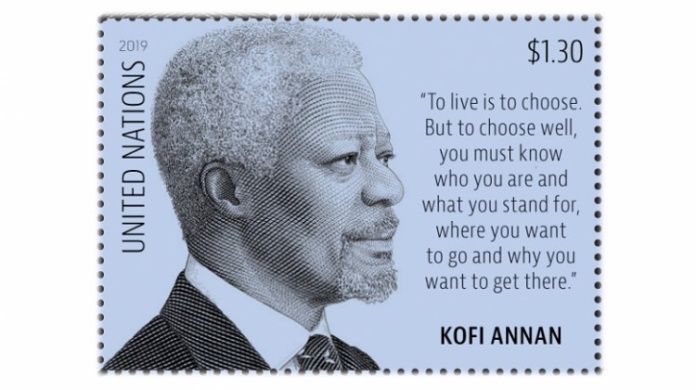 An illustrious son of the soil, Ghana’s Kofi Annan is still making an impact even in the after-life. The former UN-Secretary General has been etched in the annals of time with a stamp from the United Nations Postal Administration.⠀

The $1.30 stamp has a white and black image of the late Nobel laureate with a blue background, the year of issue, the United Nations and one of his famous quotes “To live is to choose. But to choose well, you must know who you are and what you stand for, where you want to go and why you want to get there.”

The stamp was first shared on the social media channels of the
United Nations Permanent Missions.

Mr. Annan who on the 8th of April, 1938 served as Secretary-General from 1997-2006, earning a joint Nobel Peace Prize with the UN in 2001 for his work in the organization. He was also the first black man and second African to hold this position handing over to Ban Ki Moon in 2006.

The former Chancellor of the University of Ghana passed away on August,18, 2018 after brief illness in Bern, Switzerland leaving the world in a state of shock and disbelief.

He was given a state burial which was attended by international dignitaries all over the world including UN chief, Antonio Guetteres and later buried at the military cemetery in Accra.

Genevieve Nnaji just blessed our feeds with these timeless photos

20 of the best Ghanaian photographers in 2015

#ThrowbackThursday: 8 Old Ghanaian songs we are still jamming to in 2019

9 women out of 11 architects designed what is set to become the...

More Soup Please! Here are Accra’s Top Places to Eat Fufu On A...