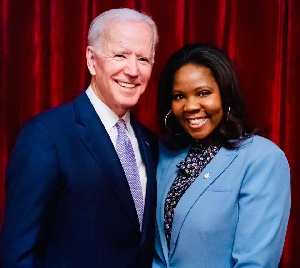 You need to meet Joe Biden’s National Adviser for Black Engagement, Adjoa Asamoah who helped him win a lot of black voters that propelled him to win the U.S elections.

A Ghanaian American international influencer and impact strategist, Adjoa’s work was critical in key states including Georgia, Michigan, Wisconsin, and Pennsylvania that handed the Biden and Harris who is also the first woman to be vice-president in the U.S a decisive victory.

“As the National Advisor for Black Engagement, I work on multiple fronts to meaningfully engage the Black community, ranging from the African Diaspora to the Panhel family,” explained Asamoah.

Adding that: “Standing up the TEAM UNITY initiative and the Divine Nine GOTV rally that tens of thousands of D9 members attended (featuring Senator Kamala Harris, with DJ D-Nice and others) are just two examples of the kind of work I do,”

She also holds multiple licenses including one as a behaviour specialist. Asamoah earned her three degrees in psychology, prioritizing human behaviour because she wanted to understand how Black people survived enslavement while living under oppression, “and even thrive in some cases on multiple fronts”, she explained.

An ardent student of Nkrumahism and his philosophy on liberation, Asamoah then a college undergraduate visited Ghana as an international student to study African history.

Adjoa told Watch Yard that her father was born in the then Gold Coast before Ghana gained independence and her mother during the notorious Jim Crow era.

“My father was born under colonisation in what would become Ghana and retired as an Africana studies and political science professor. My mother was born in the Jim Crow south, and experienced racism on multiple fronts. Both were civically engaged, and I was born into the movement, with their lived experiences informing my career choices,” Ms. Asamoah said.

“Standing up the TEAM UNITY initiative and the Divine Nine GOTV rally that tens of thousands of D9 members attended (featuring Senator Kamala Harris, with DJ D-Nice and others) are just two examples of the kind of work I do,” she said.

Her name first gained national attention in 2019 when she grabbed headlines through a campaign to get California to ban natural hair discrimination through the creation of the groundbreaking CROWN Act.

“I understand the power of people and coalition building,” Asamoah said last June when she introduced the groundbreaking anti-hair discrimination bill. “I have leveraged both to get legislation passed in the nation’s capital. It’s always amazing to witness that power, as was the case during the committee hearing for this bill. The organizations that I worked to garner support from are powerful. When I tapped my personal network and reached out to the leaders of entities like Delta Sigma Theta Sorority, Inc., The National Council of Negro Women, The U.S. Black Chambers of Commerce, and even, NOBEL Women, they all agreed to support my advocacy and this bill.”

According to her website, she was appointed as a senior policy advisor in the District of Columbia’s Executive Office of the Mayor, followed by an appointment to the Commission on African American Affairs, where she served as the highest ranking elected member.

Adjoa just like her ancestor Nana Yaa Asantewaa has been pivotal in galvanising voters , support around policies and raising money for the election.

She was a speaker at the historic Democratic National Convention video which introduced Kamila Harris as running mate.

“Progress is not a spectator sport, and as a strategist who mobilizes leaders and communities for social change and political action, it was important for me to help fight this battle,” she told POPSUGAR. “But I remained faithful, and I paired sentiment with action to shift the tide. Now, we’re about to have the first woman and person of color as vice president.”

First photos and videos from the traditional wedding of dancehall star, Kaakie

Serwaa Amihere transformed into a real-life Ghanaian queen for #GhanaWeekonGhOneTV

15 pretty outfits to wear to church on Sundays

Papa Oppong, Akosua Afriyie-Kumi and 48 outstanding young people who have been nominated for...