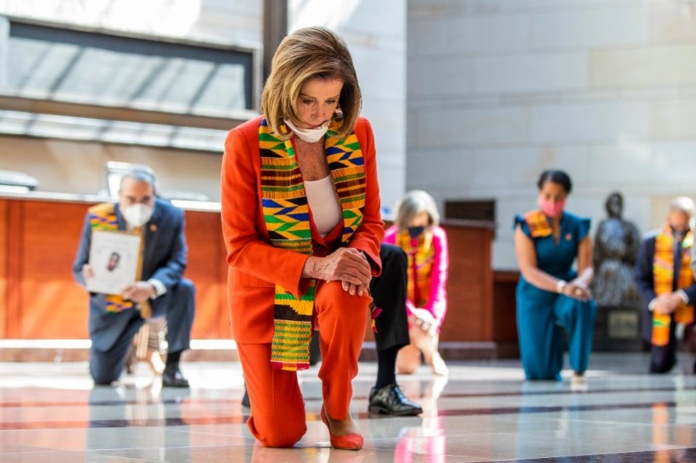 Democrats in the U.S House of Representatives on Monday honoured the memory of George Floyd, a victim of police brutality in a “historic” event.

Presenting a police reform bill to the lawmaking body, the Democrats led by House Speaker, Nancy Pelosi knelt in silence for 8 minutes and 46 seconds, the exact amount time it took a Police officer to keep his knees on the deceased.

READ MORE: Ghana’s President is sending sartorial and cultural messages with his outfits at every coronavirus address

The Police reform bill seeks to address issues of police brutality and racism that has affected several African Americans in the United States.

As part of the protest, House members including Corey Booker and Kamala Harris wore Kente soles in solidarity with the Black civil rights movement.

“Last summer, a number of us went to Ghana to observe the 400th anniversary of the first slaves coming across the Atlantic,” Nancy Pelosi said during a speech in the House

“That tragedy, that horror of history, a then slavery in our own country and all of the consequences at that. We are here to observe that pain. We are here to respect the actions of the American people to speak out against that specifically manifested in police brutality. We are here to honour George Floyd.”

Meanwhile, the move has been met with mixed reactions from different quarters on social media. Whiles some found it symbolic and positive, others criticized the leaders for trying to score “cheap political points” and misplaced.

Fashion and Costume historian, Shelby Ivey Christie in a post on micro-blogging site, Twitter, mentions the flagrant use of the Kente cloth by these politicians which is deeply rooted in Ghanaian culture.

“If there was ever a time for Ghana to enforce their intellectual property copyright of protection over kente + adinkra textiles the time is NOW cuz…………….,” tweets, Shelby

She points out: The use of kente cloth is “protected as an expression of folklore” according to Ghana’s Copyright Act of 2005. Its use by politicians during a press conference as a form of intentionally conspicuous “activism” hardly feels as though it falls into any of the categories authorized for intellectual property use. Instead of representing the culture through kente cloth, they’ve done more to undermine it by ignoring its intended cultural use.

Ghanaian American Creative artist, Joshua Kissi also reacted to the incident with the tweet below.

Washington Post editor, Karen Attiah wasn’t having any of it and tweeted, “I really need the guidance of my Ghanaian ancestors” after seeing Nancy Pelosi and other house leaders in kente.

Kente is a colourful woven silk and cotton fabric which has a significant place in the history and culture of the Akan people who are considered to be the originators of the fabric.

In recent times, it has come to be associated with the Civil rights and black history movements.

Kente academic stoles like what Congressional leaders wore are often used by African Americans as a symbol of ethnic pride.

Inside the grand opening ceremony of the 2019 Global Qipao Exhibition that featured Ghanaian...

Sarkodie is tapping into his Ghanaian roots with these birthday photos

Ghanaians descend on Samuel Attah-Mensah after a photo of him and his adopted daughter...

Meet Mary Edoro of Lagos City Chic, the fashion editor who is putting the...